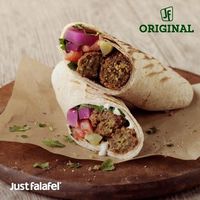 This newcomer on the Toronto vegetarian scene is a welcome alternative to the many non-veg falafel joints around the city. Head to Just Falafel at 831 Bay Street (just north of College) for a wide variety of meat-free choices. The space is clean and contemporary, and is welcoming despite its modest size.

The name, Just Falafel, is actually misleading, as the menu features such items as quinoa salad, sweet potato fries, burgers, lentil soup, chick’n burgers, mezze, and potato and falafel bites with breakfast dip. In addition to a traditional falafel wrap, you can order wraps inspired by Mediterranean, Italian, Indian (I tried this one and really enjoyed it!), Mexican, or Canadian cuisines, or build your own wrap. Not in the mood for anything deep fried? You can order baked falafels instead. Not in the mood for a falafel at all but still want a wrap? Order one with vegan Chick’n Tenders.
Vegan items are clearly marked with a (v), but many non-vegan items can be modified by leaving out cheese or certain sauces, so just ask when you’re ordering. Portions are generous, and most entree sized items are between $6 and $9, with sides between $3 and $5.
Discount: 10% off